Have your teams ever sent out an SMS campaign that came back with an unexpectedly high SMS bill? It’s probably because your message exceeded the character limit for a plain SMS or included special characters and emoji.

Recognizing the length of your SMS segments is also crucial. In plain-speak terms, a ‘segment’ refers to each self-contained part of a message with a character limit.

Here we discuss 2 basic types of SMS segment types, their character limits, and how special characters and emojis can push up SMS bills for your campaigns by a lot. You should read this.

These are SMS formats supported by flip phones and candy bar phones of old.

No emojis, no accented non-English characters, no square brackets (‘[’) or curly braces (‘{’). Just plain-text SMS. An independent, single SMS can carry a payload of as many as 160 of these characters.

Single SMS segments with one or more Emojis or Special Characters

These are a bit fancier and not supported by older flip phones and candy bar phones.

With these messages, anything goes.

Emojis, accented non-English characters, square brackets (‘[’), and curly braces (‘{’) – or all of them together – just be sure your target devices can support these characters and you’re good. But this flexibility comes at a cost.

An independent, single SMS can carry a payload of as many as 70 of these characters.

A joined SMS or concatenated SMS is one where the message length exceeds the character limit and splits up into 2 or more consecutive images increasing cost.

For regular,plain-text messages that don’t have brackets or special characters, the first message has 160 characters, but any messages longer than that get split up.

Any spillover of characters goes as a separate message in a sequence that costs extra. But, any extra messages after the first one can only have 153 characters.

That’s because 7 characters get used up in specifying the message sequence.

Here’s an illustration of what happens 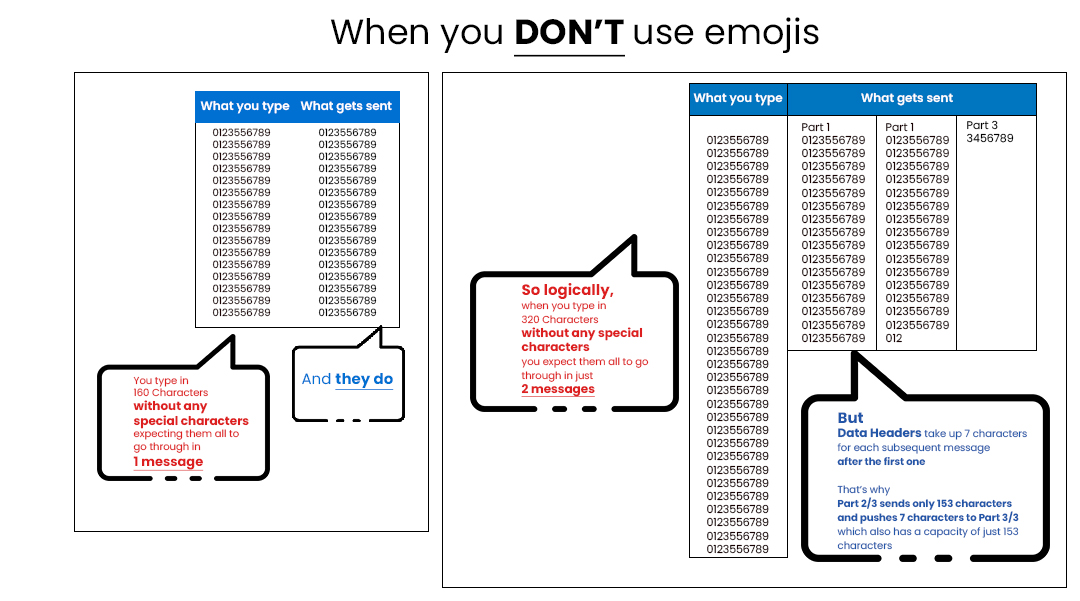 Joined Segments with one or more Emojis

It doesn’t matter which part of the split has the emoji or special character is in it, as long as it’s part of 1 message. Two things are certain when this happens:

For one, your message length per message drops to 70 and splits up anything longer than 70 characters. And two, all splits or parts originating from the same message will have a reduced character length of 70 (or 67 characters if it’s not the first part of a message) instead of 160 (or 153 characters).

This complicates things. Here is an SMS-billing nightmare to illustrate this for you:

Imagine wanting to send out a 160 character plain-text message to an audience. Slipping in just one emoji would mean your messages can only have 70 instead of 160 characters. So your messages get split up into 3 messages of 70, 67, and 3 characters, and you get charged 3 times as much as you intended!

Clearly, emojis or special characters are not for the faint-of-heart and you should weed these out ahead of time if you’re not aware of the costs. Here’s an illustration of what happens when you send an emoji:

To dive deeper understand why SMS carriers do this read our previous blog on SMS segments.

But, even if you have only a passing understanding of segments, you could still avoid a hefty SMS bill simply by limiting the use of emojis, accented characters, square brackets, and curly braces. Knowing the lengths of SMS segments available to you before setting up a campaign or SMS blast also makes a difference.

For more cost savings, reach out to our texting experts at sales@360smsapp.com or simply book a meeting here.